The OnePlus One started at an unbelievable $299 and came with specs that matched products priced twice its denomination. It was 2014, and they only had a single flagship for the entire year. With OnePlus 3 and 3T, they started releasing bi-annual flagships.

The launch event of OnePlus 7 saw them taking Apple and Samsung’s way of releasing two versions together, one that has everything and the other that has most of it at a lower price tag. This year they are back with OnePlus 8 Pro and OnePlus 8. The latter is 80 percent of the former and comes with a lower price tag.

Does the smaller sibling carry enough bells and whistles to interest buyers? Let us find out. Today, we review the OnePlus 8.

Design is something that OnePlus has not been very keen to master in all these years. We have seen them being content with a glass sandwich design with a vertical strip of cameras on the back. The Oneplus 7 marked the beginning of a change with new colors in its kitty. The newest one builds on that and adds flair to the colors.

This year the OnePlus 8 comes in 4 colors – Onyx Black, Glacial Green, Interstellar Glow, and Polar Silver. All of these variants have something going in the rear, but the Interstellar Glow which only comes for $799 is obnoxiously good-looking. It has a mirror-like finish and looks like a sunset which changes color depending on the onlooker’s angle of view. But glass being glass, it is a fingerprint hub and manages to collect them reasonably quickly.

The back and the front get a layer of Gorilla Glass 5 for protection, which is confusing. It has been quite some time since Gorilla Glass 6 has been in the market and we are yet to see it in full flow. Aside from the nit-picking, the back is a full slab of glass with a vertical camera setup in the middle. The rest is all classic OnePlus.

The bottom houses a USB-C port, the main speaker, and the SIM card tray. The power button and Alert Slider is on the right, and the volume rocker is on the left. The top houses a mic and the antenna lines. The glass is not the regular one that we are used to, but the OnePlus 8 ships with a soft touch frosted glass which feels super premium to hold and super-slippery at the same time.

At the front of the OnePlus 8, you get a 6.55-inch display with minimum bezels. There is a punch-hole camera on the top left which houses the 16 MP sensor which replaces the water drop notch on the previous iteration. The screen is super AMOLED, and it curves at the edges. It has an under-display fingerprint scanner which is one of the fastest that we have come across and rivals the optical ones easily. It misses out on some of the Pro version’s bells and whistles but is no less impressive anyway. 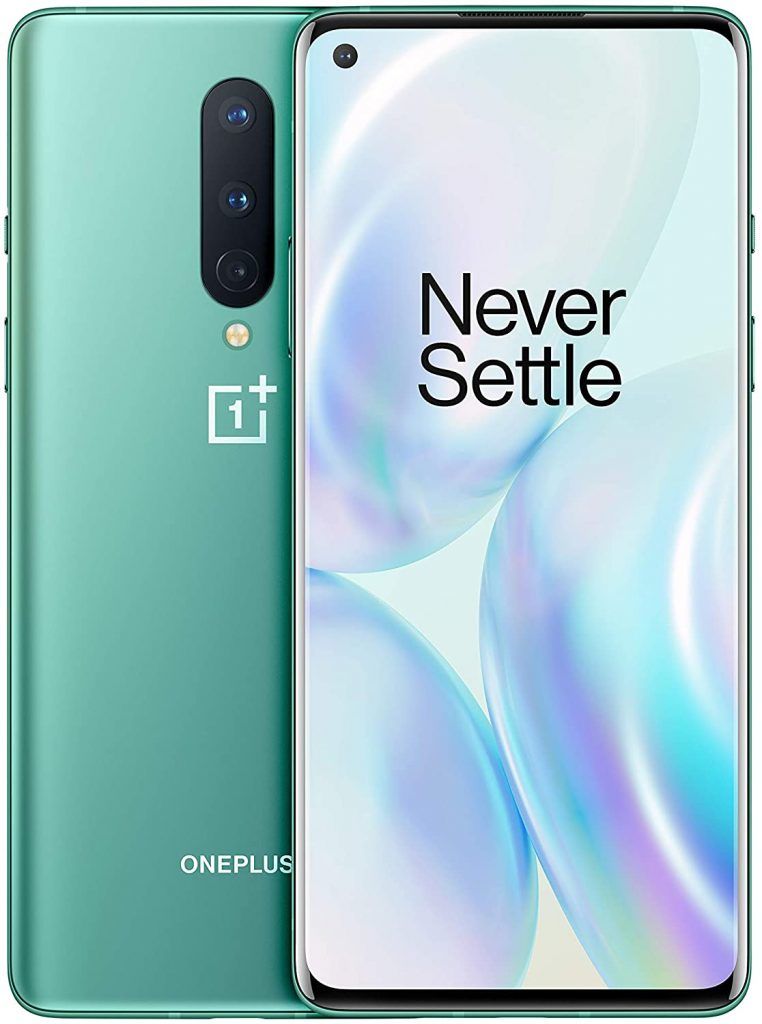 The resolution is 1080 x 2400, which results in a respectable 402 PPI. It comes with a 90Hz refresh rate to make everything look smoother and is HDR 10+ compliant to boost viewing experience. Even though the OnePlus 8 Pro has a brighter screen, the OnePlus 8 gets decently visibility at 500 nits in manual brightness and 800 in auto mode.

Users get a couple of modes to choose from to tweak the Display calibration. The default is the Vivid mode which makes the white look slightly bluish, but the reds, greens, and yellows are more punchy at the same time. Overall, the display has all the perks that you will expect from a flagship.

If you want to accommodate a 90Hz 6.55-inch panel, you would need a hefty battery to run the day. Thankfully, the OnePlus 8 comes with a 4300 mAh battery. The battery life out of the cell is highly respectable, and there is barely any difference when you toggle between the 60Hz and 90Hz options.

A moderate user can get more than a day’s life from the device. Even if you are a heavy user, it will get you through the day with some juice left. If you run out of power, there is a 30W adapter which takes the battery to 65 percent in 30 minutes. It takes around an hour to completely top the battery.

Time and again, people have reiterated the fact that OnePlus’ implementation of Android is amongst their favourites. We do not have much to differ. The OnePlus 8 runs on Oxygen OS 10.5.4 currently, which is based on Android 10 and will receive Android 11 within September 2020 (estimated).

The latest version comes in with a revamped Dark Mode, a probable fix for the green tint issue that some users faced and several other nifty additions. Even though there has been a long cry from users for Always-on Display, it is missing in the current software, and the company has promised to bring it into the system soon.

The device comes with the 7nm+ EUV manufacturing process based on Qualcomm’s latest Snapdragon 865. It is an octa-core processor with Adreno 650 GPU to cater to graphics performance. The chipset combines Kyro 585 clocked at 2.85 GHz, three Kyro 585 at 2.42 GHz, and four Kyro 585 at a lower 1.8GHz.

You get up to 12 GB of LPDDR4X and 256 GB of UFS 3.0 storage. There is 5G on board thanks to the X55 modem bundled with the processor. The processor flies through the daily mundane tasks with ease, and it doesn’t sweat even when handling the more graphics-intensive games.

With a mammoth 12 GB of RAM onboard, you can have multiple tasks running in the background without having to worry about the phone freezing or slowing down. It is one of the fastest smartphones that you will ever get your hands on, and that should sum up the performance department.

Last year the camera setup of the OnePlus 7T and 7T Pro were similar, and both of them had the telephoto lens. It made the former the more viable option, but things have changed this year. You get a 2MP macro sensor as a consolation prize instead of the zoom lens in the elder sibling. The primary sensor remains the same as the previous iteration, a 48 MP IMX 586 Sony sensor with OIS. The aperture has been degraded to f/1.8 from the f/1.6 in the OnePlus 7T for some weird reason.

Also present is an ultra-wide lens at 16 MP with f/2.2 aperture but without autofocus. The macro gets an f/2.4 narrow FOV which has been the norm nowadays. At the front, you get a 16 MP module with f/2.0 lens, capable of pixel binning your images.

The SD865 has a better ISP than the SD855, and the daylight shots with the primary sensor are as expected – sharp, detailed, and with punchy colors. The dynamic range and color accuracy are on point. The images are pixel-binned by default and outputs at 12 MP with digital zoom. The fancy color sensor is missing here, and we don’t know how to react to that.

The HDR is inconsistent, and you can find shadows will hit or miss depending on your luck. The ultra-wide sensor is a decent performer but lacks the dynamic range of the primary and the images appear washed-out. There is also a dedicated Night Mode which helps when the scene is dark, and it works amicably well in indoor and low-light scenarios.

The phone is capable of shooting 4K at 60 FPS using the rear setup when it comes to videography, and it captures decent details, and the OIS helps the footage to remain visibly stable. The front module is something that we have seen for a long time, and it performs as always, punchy colors, exposure, focus, and bokeh.

At $699, the OnePlus 8 is considerably cheaper than its elder sibling and comes with most of what makes it so good. It costs more than the OnePlus 7T, but there is barely much difference between them. It also makes the device its biggest competition. The OnePlus 7T Pro’s is also in a similar price range, and it is a tempting device.

If we talk about comparison with others, there is the Xiaomi’s Mi 10 5G and Samsung Galaxy S20+, both of which have a more capable and versatile rear camera setup. The software is the reason why the OnePlus 8 has an overall better value than these flagships.

Like most OnePlus offerings, the OnePlus 8 isn’t perfect. The camera leaves a lot to be desired, and a leap of $140 from the previous generation can stick out. If we talk about phones within Asia, the Realmes and Redmis provide solid hardware at nearly 30 per cent less price, but the software isn’t as polished.

Despite that, OnePlus 8 is an excellent device. It offers a solid screen, blazing-fast performance, respectable battery life and is cheaper than most flagships with SD 865 in tow. The build is solid, and it comes with a guarantee of regular and meaningful software updates. If you do not have the budget to accommodate the OnePlus 8 Pro, the OnePlus 8 is a no-brainer.

Check out the OnePlus Nord N10, the latest mobile launch of OnePlus on BestBuy.com here!

One Plus 7 Pro Review: Bigger and Brighter