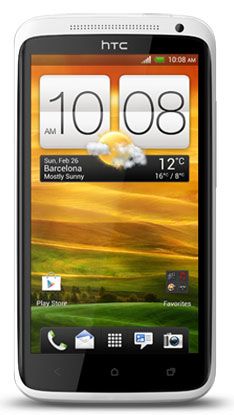 Out of the three HTC One smartphones that have come out of HTC’sstables, the HTC One X 4G is the top of the line. There is a reason to that as this phone comes with a quad-core Tegra 3 processor and also sports the new ImageSense camera technology. A 4.7 inch screen to go with all that really makes the HTC One X 4G a mouthwatering prospect.

HTC One is given a polycarbonate body rather than the traditional aluminum body that HTC phones are known for. Thanks to that, the smartphone tips the scales only at 130 g, so it is a phone that shouldn’t feel like a burden to carry around. Nevertheless, don’t be fooled by the lightweight phone or its polycarbonate body as the phone is extremely solid. However it measures in at 134.4 x 69.9 x 8.9 mm making it a pretty big phone to put in the pocket or even hold in your hand. Since this smartphone is aimed for users who are looking for function than form, thus HTC didn’t give too much attention to the size. Nevertheless, it still manages to be thin and its look oozes of something with a lot of elegance. The 4.7 inch screen has a black glass frame, something new in terms of design.

Underneath the screen are the Android capacitive buttons while on top of the screen is the 1.3MP front-facing camera. On the right side of the HTC One X 4G is where the volume rocker is situated and this button is responsive to touch. While on the top of the phone is standard audio jack as well as the power/lock button which was also good to touch. Also sitting on the top is the Micro SIM tray. Meanwhile on the left side of the phone is the microUSB port. Finally flipping the phone reveals an 8MP camera which comes with both ImageSense technology and LED flash.  Also on the back is a really nice looking speaker grill.

HTC One X 4G comes with a huge 4.7 inch screen that has a resolution of 720 x 1280 pixels. For a huge screen like this, getting a pixel density of 312 ppi is really good. HTC One X 4G’s screen is of the Super-LCD 2 type rather than the S-LCD panel which is supposed to give better viewing angles and less glare. True to the claims, the screen did have good viewing angles although the glare was still noticeable. The screen was as good as the AMOLED screens when it came to the nicely saturated colors it was able to produce. Although the screen can sometimes over saturate the colors, it still does a great job overall.

True to its name, the HTC One X 4G is number one in using a quad-core processor for a smartphone in the form of the Tegra 3 processor by NVIDIA. That is some serious horsepower under the hood and that should see off every challenge that the user can possible throw at the HTC One X 4G. For those who like to see the performance in numbers, this baby produced an average score of 4500 in Quadrant Standard. As expected, there was no lag when doing anything from browsing the internet to running 3D games.

A high end phone like the HTC One X 4G surely deserves to run on the Android Ice Cream Sandwich and rightly so as the phone is running on Android v4.0.3 Ice Cream Sandwich. Since this is the latest version of the OS, there are a lot of improvements on every nook and corner. However, since HTC has also given the smartphone the latest version of Sense in the form of Sense 4 UI the smartphone isn’t able to show all the improvements the OS has to offer. HTC’s aim with the new UI is to make the experience a lot simpler but at the same time maintaining the class it is known for. HTC has achieved that with this UI and has still kept its characteristic weather clock and big widgets that fill up the homescreen. What it has done for instance is reduce the eye candy like doing away with the spinning carousel that happens whenever u move between homescreens with a quick swipe.

As already seen on the HTC One V, the camera on this phone also comes with the ImageSense technology meaning it starts up in no time. The camera interface itself is interesting as the camera now has continuous shooting mode and it can now also take photos while a video is being shot. The 8MP camera was put to test and it produced photos with a good amount of detail. However, the increase in detail was somehow causing an increase in noise levels as well. However, color balance was good and the photos appeared natural. Video recording on the HTC One X 4G is done at 1080p at a low rate of 23fps, a weird combination. The details were good, but it wasn’t smooth.

The internet browsing experience on HTC One X 4G wasn’t a fun affair. The browser wasn’t intuitive and there were some issues with the many buttons found on the screen. These buttons for instance the ‘back’ or ‘tabs’ key appear and disappear as they like. It can get really annoying at times. In terms of connectivity options, the phone comes with all the usual options and also has 4G LTE connectivity onboard.

Moving on to call quality, the smartphone did a nice job on both ends. Voices were loud enough and the words were easy to make out. However, staying away from noisy places might be a good idea if you want to hear everything your friend is saying. The speakerphone was ok, nothing to brag about. A phone with a giant screen like the HTC One X 4G surely deserves a huge battery and it gets one in the form on the 1800mAh battery. It should get an average user through the day.

HTC One X 4G has a really slim body and it is also solid. The 4.7 inch was great and it has got the quad-core processor under the hood.

Video recording was bad mainly because of the low recording rate and the browser needs some work.

The HTC One X 4G has got a long list of great hardware in it to go with its refreshing new look. It performs very well, but it still has its flaws in some areas, so paying a huge sum to get this phone has its pros and cons.